MMORPG gaming has traditionally been a PC gaming thing. While some games have tried to find MMO success on console, most fail miserably. Neverwinter on Xbox One is giving it a whirl, giving Xbox gamers some D&D action. But can it deliver that real MMORPG experience.

Neverwinter is a dangerous place and only you can save it. Okay, well, you and every other player who chooses to log on. The storyline isn’t the most compelling at the start, although the opening cinematic is rather entertaining and fun to watch. It follows the usual course of MMORPG story telling as you move from one area to the next, helping defeat ever more powerful enemies who are threatening… something. The details are generally quite murky, but that works out just fine – it’s all just an excuse to run around killing things and getting cool gear, right?

I was worried about the transition from PC to Xbox One, but the controls are actually phenomenal. They managed to fit the wide range of menus and controls brilliantly to the controller. This is aided by the fact that at the start you can’t actually do too much. Once you get used to the various forms of attack and movement, it becomes easy to add-on abilities and more interactions in the intuitive UI. Added to this, the usual MMO approach is used whereby every new feature is introduced with a quest to explain it to you. From equipping gear to developing professions or getting a companion, it’s all easy to understand and follow.

In fact, the game in general feels rather straight forward. Most of the time, I felt like I was running down a rather long, sparkly corridor. Yes, Neverwinter has the cool feature of giving you a sparkling path towards your quest objectives. Of course, if you actually like exploring the map and finding things for yourself, you will feel that this is far too much handholding. You can always choose to ignore the sparkling path (and sometimes find a chest for your effort), but it’s usually best to just go where you’re supposed to. 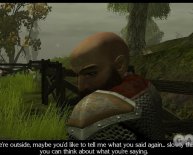