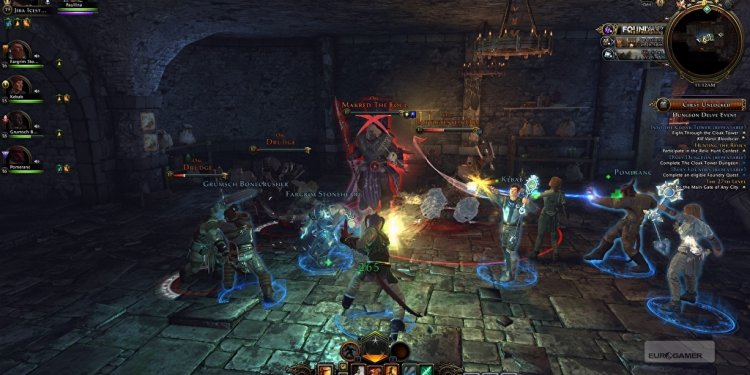 Neverwinter Nights 2 builds on the hard lessons leaned by Obsidian in the development of Knights of the Old Republic 2 - and does so excellently - after the disappointing, unfinished state of the latter.

It's a return to Forgotten Realms RPG roots this time around, following Bioware's first Neverwinter Nights game, which placed it's focus squarely on the Aurora Toolset. While the Toolset also returns in a greatly improved form, the game's emphasis is back on a central, single player story arc that really delivers... right up until an anti-climatic finale. Which I won't spoiler here.

The plot itself does little to break sci-fi/fantasy clichés, (Small town youngster rises to become a hero) but NWN2 gets away with it through an involving and impressive attention to detail and some truly interesting and fully developed companion characters, such as; the bitingly sarcastic 'Sand', the brooding and amoral 'Bishop' and the whiny but likable 'Neeshka'.

Sadly, they are balanced by other characters that remind you at times how clichéd this game is. The dwarven character, 'Khelgar' is a prime example, who, despite being ably brought to life by Adam Sietz's voice acting, is all too reminiscent of The Lord of the Rings' Gimli. Casavir, the paladin suffering a crisis of faith and Black Garius, an evil mage plotting the downfall of Neverwinter, are not particularly original either.

Luckily, the game doesn't let the player dwell on it's clichés but keeps the story and action moving ably, throwing something new your way just as either the plot or the tasks set you, begin to become repetitive. This sustains you through all three acts and keeps boredom at bay but splits the meta-plot into separate but converging threads, which can leave you waiting for loose ends to be resolved for a long time.

While the game relies heavily on the Forgotten Realms setting, just as Baldur's Gate and Icewind Dale did before it, it isn't afraid to change things. This can be both good and bad, as it offers surprises for people familiar with the original material, but also some all too blatant contradictions. These will hardly bother the casual player or one who has little interest in the Forgotten Realms but for fans, they can be irritably distracting. The three most glaring changes are:

* The absence of the town of Leilon from the southern edge of the Mere.

* The placing of Neverwinter as a coastal port - it lies several miles in land, (though this is an error repeated from the first game.)

* And most of all, the use of the ancient elven kingdom of Illefarn in place of Phalorm, the realm created by humans, elves and dwarfs, which fell not long after the empire of Netheril.

Fan gripes aside, NWN2 is a excellent game and a must-buy for anyone who enjoys both the social interaction of a MMORPG but longs for the story driven play of a more traditional RPG.