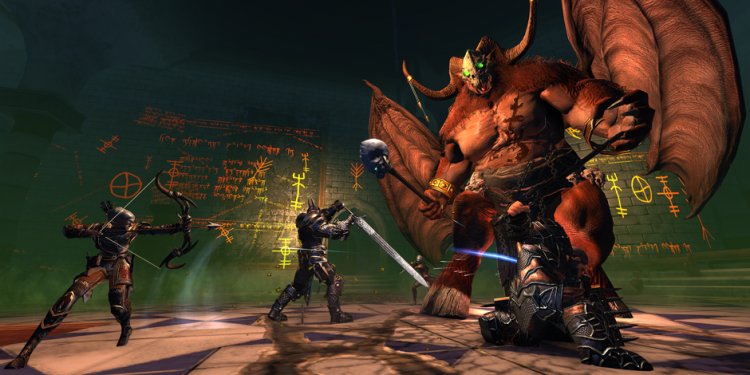 We’re here to give you a little insight into the story and background of our upcoming Neverwinter: Storm King’s Thunder, and how it ties into Wizards’ upcoming release.

As you’re probably aware, the upcoming expansion is all about giants. Let’s start off with a bit of their history.

Back in ancient times (a seriously LONG time ago), giants and dragons were mortal enemies. The two powerful races hated one another and were always vying for supremacy. Thousands of years ago, Ostoria, the last great empire of giants fell after a long and brutal conflict with the dragons. Since then, both giants and dragons have had their ups and downs. Recently, with the help of the Cult of the Dragon, Tiamat and her chromatic dragons have become real threats once again.

Infuriated by how ineffectual and aimless giants have become, especially when the small folk were the ones to challenge Tiamat, Annam the All-Father, chief among the giant gods, decided to take action.

The ordning was a caste system imposed by Annam the All-Father. It dictated where a giant stood among his or her kind. Traditionally, the top of that chain had been held by storm giants. Tall and powerful, they have always worked to keep the other giant races from destroying the small folk. Below them were cloud giants, fire giants, frost giants, stone giants, and hill giants.

In his rage, Annam the All-Father shattered the ordning between the giants to break his “children” out of their complacency. Now all six giant types are challenging the established hierarchy, each with their own plan as to how to rise to the top of the heap.

All of these plans put us small folk in danger in one way or another, but it’s the merciless frost giants you’ll be battling up in Icewind Dale.

The namesake of this module, King Hekaton is the king of the storm giants. Unfortunately, since the shattering of the ordning, Hekaton has gone missing. With this powerful force for good gone, and all of the giants attempting potentially devastating schemes, we small folk are in a lot of danger. You’ll want to pick up Wizards’ book, Storm King’s Thunder to learn more about what happened to Hekaton, as well as the other giant factions.

Jarl Storvald and the Ring of Winter

This section gives some secrets away for the upcoming expansion. If you don’t want any spoilers I’d suggest jumping ahead to the next section!

A fierce and powerful jarl, Storvald has traveled to the coldest reaches of the Sea of Moving Ice to reclaim his ancestral home from dragons that have long since made it theirs. His plan goes far beyond reclaiming his land, however. He has childhood memories of a legend... a legend of a frost-coated, golden ring that can freeze the oceans and blanket the world in mountains of snow. Small folk know this artifact as The Ring of Winter, but to Storvald it’s the Ice That Never Melts.

This ring, which grants its wearer immortality, was last in the possession of a Harper known as Artus Cimber. Guided by magical runes, Storvald has traced its location to Icewind Dale.

We’re super excited to be heading back up to Icewind Dale with a whole slew of new threats and plot lines. Be sure to look for upcoming blogs to learn more about the features in Neverwinter: Storm King’s Thunder.