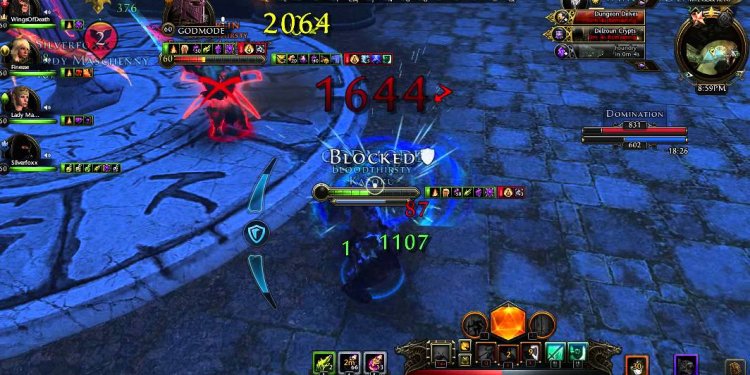 
The Guardian Fighter From the Official Video Trailer

The Guardian Fighter is courageous and stalwart, superior at defensive maneuvers, and no stranger to hand-to-hand combat. Heavy plate armor and a shield make the Guardian Fighter a durable mainstay on the battlefield, while a trusty longsword and focused aggression cut through foes that stand in the way. Some fighters choose to rely on large imposing weapons, others prefer dirty tricks. You believe that fighting better means fighting smarter. You traded in large cumbersome heavy weapons for superior defenses and the ability to control the battlefield around you. The Guardian Fighter is the undeniable leader of a Neverwinter dungeon party. Always willing to selflessly sacrifice his or her body for the safety of the party, they are first to charge into combat and draw enemies’ attention, giving the rest of the party time to react.

You fight with sword and board. Equipping a longsword in one hand and a shield in the other allows you to best defend your allies on the field of battle. You can use your shield to block incoming attacks, or slam your enemies, weakening them. Your longsword can be used to cleave through swaths of enemies, ensuring that their attention is kept on you and not your allies. Your shield may be used to temporarily weaken foes who threaten you or your allies.

STR: This is one of your secondary stats. It increases your guard meter and damage. Recommended: 12-16 before racials.

CON: This is your primary stat and as such need to be high. It gives you more HPs and increases the gain of action points. Recommended: 16-18 before racials.

DEX: This is your other secondary stat. It improves your damage resistance to AoE effects and increases your chance to deflect blows. Recommended: 10-16 Before racials.

WIS: This stat improves control effects, such as knock downs and stuns. Recommended: 12-16 before racials.

Below are the recommended race choices for those wishing to try out guardian fighters.

Half-orcs combine the best qualities of humans and orcs, though some would argue that the good qualities of orcs are few and hard to find. From their orc blood, half-orcs inherit great physical strength and toughness. They are fierce warriors, fleet of foot as they charge into battle.

Furious Assault:: Your Critical Hits do an additional 5% damage.

Swift Charge: You gain a 10% bonus to Runspeed for 3 seconds when you enter combat. This effect can only occur once every 20 seconds.

They are small, and as such, not normally suited to stand up to an angry orc or ogre. However, they have some class features that are good for a class focused on defending and a bonus to Dexterity.

Bold: Your fearless nature increases your resistance to Crowd Control effects by 10%.

There is no class a human can't excel in. As a fighter, you can be quite versatile, and three extra Heroic Feat points can easily turn the tide. Better defense is a big bonus. However, the lack of a secondary stat hurts a little.

Stat Bonuses: +2 to Any Ability Score

Heroic Effort: You gain an additional Heroic Feat point at levels 10, 15 and 20.

Versatile Defense: Increase your Defense by 3%.

This race has stats that will always be important for fighters. However, what makes this race great as a Guardian Fighter is amazing racial traits that scream "defender". The dwarf is an excellent choice for the more defense-orientated fighter.

Cast-Iron Stomach: You have increased resistance to Damage Over Time (DoT) effects.

Stand Your Ground: You have increased resistance to Knock and Repel effects.

Abilities such as Lunging Strike can be used to charge your enemy, closing the distance between you. Enforced Threat can be used to ensure that your quarry attacks only you, allowing your teammates to move more freely through the battlefield. Even stronger powers, such as Fighter’s Recovery, can be used in moments of duress to help you stay alive and continue to protect your allies when the battle turns grim.

As a primary melee tank class, the Guardian Fighter believes that the best offense is a good defense.

The Guard skill is initially mapped to the Shift key, allowing the character to move around and block most incoming damage with his raised shield. Movement while blocking is somewhat slower than usual, but the trade-off is that actively blocking enemy attacks completely negates control effects.

Blocking requires Stamina, which is sapped by merely holding the block. The Stamina meter is the blue meter bar to the left of the character. While blocking, this meter decreases until it dissipates entirely. When this happens, the meter turns from blue to red. If the meter runs out, the character is unable to block until the shield meter is refilled. This is clearly less than ideal for a defense-based class, so the Guardian Fighter will need to strike a balance between blocking, avoiding, or taking a hit.

The shield meter will refill on its own, but can be refilled faster if one uses certain skills that increase it, which normally come in the form of attacks. Tide of Iron, for example, deals damage to your enemy, weakens it, and restores some of your stamina.

Blocking is not your only option, however. Stay mobile and watch for enemy attacks; you can move away from some of them.

Additionally, there are a few Encounter skills that taunt enemies for forced attacks. Enforced Threat, for example, deals area damage and taunts all enemies within range, forcing them to attack the Guardian Fighter for the duration of the effect. This is one of the most used skills in your arsenal.

Another useful skill is the Mark ability, mapped to the Tab key, which paints a big red X on the target. The marked creature suffers a mitigation debuff when attacking anyone but the Guardian Fighter who marked it. It's not quite the same thing as generating threat, but it's definitely a useful tanking skill.

Brandis stood in the doorway and waited. A slow breath did nothing to calm his pounding heart, and he emptied his lungs with a whispered prayer to the Raven Queen:
"Not today, Dark Lady. Please"

He listened to the pounding of the demon's hooves drawing near and to the frantic rhythm of his companions' feet as they fled behind him. If he could buy them a little time, maybe they could get to safety. Maybe Verna Wouldn't die.

The demon rounded the corner and bellowed in triumph. Its roar assaulted his ear, shook the stone beneath his feet, and blasted at his face, but Brandis held his ground. Lowering its head, the demon charged. 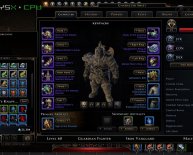 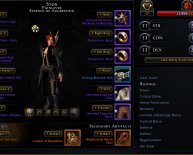