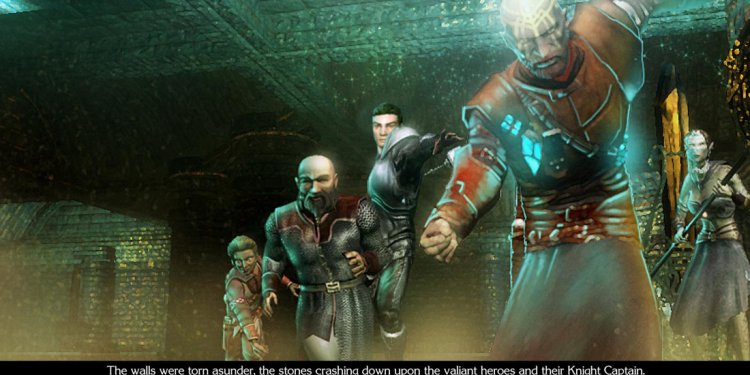 There's an apocryphal cop-out that bad Dungeon Masters are reputed to use whenever they get pissed at their players, or can't figure out how to end an adventure. It's called "Rocks Fall. Everyone Dies." Spoilers (and an explanation) inside.

For a spoiler which connects this cop-out to the end of Neverwinter Nights 2, scroll down...

Ah, screw it. You deserve to have it spoiled, because there's no reason to wait in anticipation for the ending when it is basically just this:

Neverwinter Nights 2 starts out OK, with a decent storyline, better graphics than its predecessor, and a solid Act 2 wherein the main character inherits a keep and has to go from "attack mode" to "defense mode", building up the keep for a coming attack.

It also features the same character interaction found in the Knights of the Old Republic games, wherein you can influence your NPC companions through dialogue options and side quests.

However, this all collapses in on itself at the end of Act 3, where most of those choices become meaningless. Theoretically up to a half dozen of your companions can choose to turn against you in the end, but realistically it's only one or two, and their deaths - when you run your sword through them - are meaningless, with nary a tear shed before you proceed to loot their corpses like anyone else's corpse.

This is to say nothing of the actual ending, after you defeat the bad guy. The moment the final killing blow lands, that's the end of your game. Cue the badly sized-up photoshop slides, with narration done by Jimmy from the mail room. That's right, not even cutscenes, not even pre-rendered video, not even a professional voice actor. Just some guy reading some lines over some slides. That's it. That's the end.

And what is that end? Well, as the title suggests...

You, the hero of the realms, along with 10 or so stalwart companions, all of you 20th level whatevers, with access to the most powerful spells on the planet. Are crushed. Under some rocks. Or something.