Greetings, adventurers! We’re here to tell you about Neverwinter: Storm King's Thunder: Sea of Moving Ice. This new release is the story culmination of the Storm King’s Thunder adventure, and ties in with the Wizards of the Coast’s latest offering set in the frozen northern waters of the Sword Coast!

To recap our story, Artus Cimber has pinpointed the location of the Ring of Winter at Svardborg, the lair of Jarl Storvald in the Sea of Moving Ice. It seems an impossible task, but with the fate of the world on the line, an attempt must be made to punch through the giant's defenses and recover this ancient artifact.

Battle on the Sea of Moving Ice

With Storvald on the cusp unlocking the final secrets of the Ring of Winter and unleashing an eternal freezing cold across the world, an assault must be made. Unfortunately, Svardborg is so heavily guarded and a weak point needs to be found. The first plan of attack is to pick off frost giant encampments, patrolling longships, and fighting their enslaved Ice Hunter henchmen around the Sea of Moving Ice.

While these harrying tactics prove useful against the frost giants, a larger force is needed to make the final assault on Svardborg. They will need to rally and recruit everyone who is still fighting in the Sea of Moving Ice. This includes Elk Tribe barbarians, refugees, and others who have shown up to fight the giants. It's important that forces are molded into a cohesive front.

New Zone: The Sea of Moving Ice - The Sea of Moving Ice is a loose connection of seven large and a dozen smaller icebergs, with the largest big enough to support a small army or an entire tribe of Ice Hunters.
Jarl Storvald has been using this vast ice floe to muster his forces to attack once he controls the Ring of Winter. Artus, Cattie-brie, and a handful of heroes have set up a secret camp on a small iceberg, magically hidden by the powerful Arcane Brotherhood mage known as Kavatos Stormeye. From there you will set about to take down Storvald and his army.

New Mounts: Khyek Boats – Is that flail snail mount of yours afraid to go into the salt water? Fear naught!
When you come into the Sea of Moving Ice, we give you a Khyek outrigger boat for travel between the icebergs. Work hard and you’ll get a better one! Remember: you don’t have to be faster than a dragon turtle, just faster than the guy in a khyek next to you.

New Gameplay: Fishing – We’re heard your feedback and have made fishing a whole new system built as a mini-game! Come try your luck and skill… but try not to become bait yourself!

New Trial: Assault on Svardborg - Join nine other adventurers in an epic assault against Jarl Storvald and his army to take back the Ring of Winter!

New Artifact Weapons - In your continued efforts to reclaim lost relics from the frost giants, you will earn powerful artifact weapons. These weapons are far stronger than any seen before. You are going to need them to take down Jarl Storvald!

New Gameplay: Treasure Hunting - While adventuring in the Sea of Moving Ice you can come across bottles with bits of map in them. Match up the image on the map with a place in the zone and start digging. Treasure awaits!

Be sure to check out this epic conclusion of the Storm King’s Thunder storyline in Neverwinter’s newest update, Sea of Moving Ice! 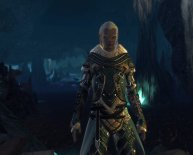